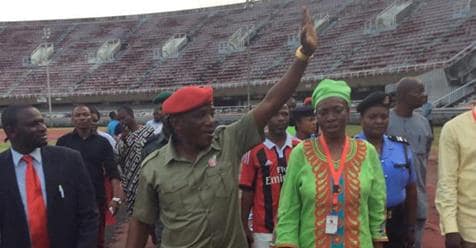 It was knocks and applause for the Lagos State National Youth Service Corps, NYSC last week when the Minister of Sports and Youth Development, Solomon Dalung came visiting. Medinat Kanabe was there.

The minister arrived the Iyana-Ipaja NYSC orientation camp before 9.00 am for a tour of facilities in the camp. From the open parade ground, he inspected the clinic and the hostel facilities, with the state coordinator, Mr Cyril Akhanemhe in tow to fill him in on necessary information.

Thereafter, he expressed his satisfaction with the hostel but suggested that the environment be well-lit for security purposes.

He condemned the inadequate water supply in the camp, saying the five boreholes in the camp are grossly inadequate. He said: “And if you have only five boreholes, I don’t think it is enough. I am saying this because I don’t know when you will have a new place, but I know that we will have more graduates and the boreholes you have here may not be able to serve in the near future.”

He advised that the orientation camp should be run on a quarterly basis, rather than in streams, as it is presently being done.

He explained that the ministry understood the present situation, saying “When we started this scheme we had only about 3, 000 graduates, so we didn’t plan for what we have now, (but) it is better we take care of what we have. Camps are not owned by NYSC but state government, they maintain it; we only put it to use so whatever they have given us is what we will make use of. If we had planned for it, the whole of NYSC locations would have started with permanent structures. The visioners of the scheme did not even anticipate that it would live as long as it has lived today. Looking at the time it came, immediately after the civil war, it was part of the strategy to try and bring Nigerians together but we didn’t anticipate what we are having today.”

At the secretariat, he visited the entrepreneurship centres. At the cat fish pond he was impressed but advised to expand their fish farming to Epe in Lagos, so that the scheme can become a big supplier of fish in Nigeria.

Moving further, he condemned a situation where the solar energy department scheme teaches corps members about solar energy and how to install it in homes, but doesn’t power its secretariat with solar energy. “I really would have been impressed if I saw your own installation.” He said.

Other places he visited include the poultry, tailoring, beads and handcrafts department and encouraged the culture of maintenance, saying “The decay in our facilities affect the moral of staff in work places.”

He advocated a clear-cut separation between government staff in the youth service section and the corps members, to enhance efficiency and respect.

At the end of the tour, he said Nigeria cannot dismiss the gains of the NYSC in integrating the country. “I will stand for the sustenance of the NYSC and that the scheme should continue to grow with Nigeria.”

He also said government will continue to support the NYSC and advise that they move from just training corps members to engendering entrepreneurship. “Our youth must embrace the reality of time and must venture into other areas of economic development.”

The minister thanked the Lagos State government for renovating the camp, while the Director General, NYSC, Brigadier- General Olawunmi Johnson thanked the Minister for coming to the camp and secretariat, saying it was the first visit of a minister in a long time.